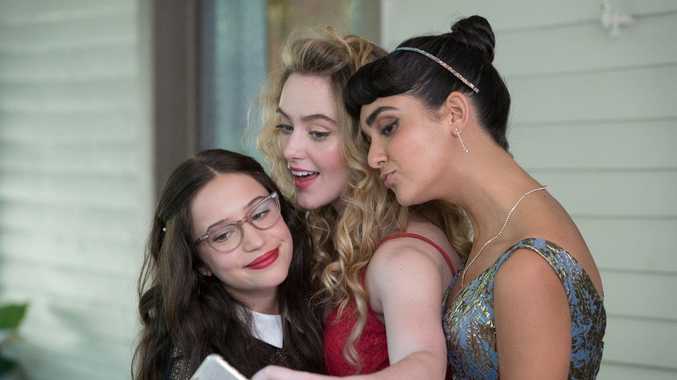 Everybody love a good comedy movie and everybody loves John Cena, but does everyone love Blockers? Probably not, but it’s not a terrible film. While it is a movie centering around Prom, this film is definitely more for parents than young adults/teens as the film subverts expectations and teaches parents a lesson.

Blockers follows three daughters on their most memorable night of their lives: prom. However, they decide to make it even more memorable creating an everlasting bond, by losing their virginity. So, while half of the film is focused on the girls’ journey into adulthood and their hilarious encounters with their dates, the film also attaches to their parents once they figure out about #SEXPACT2018 through emoji language.

The movie is definitely more about the parents’ journey than their children’s, as they learn to accept that their children are soon to be adults. Determined to stop their children from making “the biggest mistake of their lives” by having sex, the trio of parents make it their mission to crash prom.

I’ll glady say that John Cena was my favorite part of the film. To me, he had the funniest parts and jokes and its refreshing to see him starring in a comedy. He really holds his own, even as he butt chugs beer. Leslie Mann and Ike Barinholtz are pretty much typecast as always, especially for the type of jokes they have. They’re still funny, but it’s nothing we have never seen before from them. The girls also have their own humor surrounding them, mostly because they are each their own female stereotype (the hopeless romantic, the tomboy, and the the nerd/lesbian).

I’ll also have to give it up to Kay Cannon, the female director of Blockers who also directed the Pitch Perfect films. She took a script, that on the surface was just another shitty, through-away comedy, and turned it into sort of a new-age feminist manifesto. Taking the old double standard of virginity, called it out on it’s BS, and  tossed it away. Cannon’s representation of sexually-liberated, horny teens, is probably as accurate as it gets today. She’s even gracious enough to throw in some LGBT representation, as one would expect when teens are navigating their sexuality. I, for one, had no idea that there would be a coming-out story included, but since this film is meant for old-fashioned adults I think it’s nice that they added it. Don’t get me wrong, it’s no Love, Simon, but I did enjoy the addition. However, at some parts it can feel a little preachy. One part in particular, one of the parents spends a good couple of minutes of screen time lecturing the other parents. A little on the nose, but regardless still a good message for parents who are hesitant to let their kids grow up.  There is also a lot of forced drama between the parents and their kids. Of course, since their parents are determined to “save” them, as if they were damsels in distress, the girls are furious, but everything is wrapped up too quickly.

Blockers is definitely not the best film in theaters right now, but I wouldn’t skip it. It has some great #GRLPWR and some funny ass scenes. My entire theater was laughing nonstop, as was I. Overall, it has that same kind of comedy as Girls Trip and Bad Moms. My main problem with the film was how forgettable it was. I struggled to write this review because there was so much that happened, so many jokes that only a handful came to mind. Even after watching my initial reaction was “What did I just watch?” However, I feel like this film would be great with a group of friends in theaters, or even at home once it’s available for streaming.